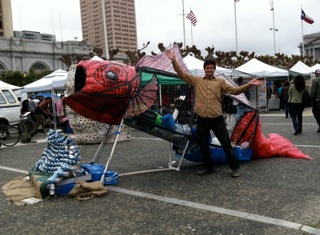 School Of Fish (awareness about plastics in our Oceans)

Our waterways are becoming increasingly polluted and much of that pollution comes from plastic products that degrade dangerously and kill fish. By reducing and changing the materials we work with each day, we can remedy this problem.

On Earth Day 2011 in downtown San Francisco, our School Of Fish exhibit was on display. It was in partnership with our Wrap Stars Campaign to reduce and redesign unnecessary, wasteful, plastic packaging. We were inspired by artist and teacher Angela Haseltine Pozzi. She collects garbage and plastic material that washes up on the local shoreline, which she turns into beautiful art sculptures. Matter of Trust teamed up with local sculptors who created large impressive interactive works that swallowed trash, provided audio of Clean Oceans Facts, demonstrated smart packaging alternatives and much more.

Our main showcase piece was a 16 ft fish made out of recycled material. We also asked schools from all over to showcase the creative ideas of their students about plastics in the oceans. We wanted to have as much art from students representing fish as we could possibly gather. These schools were so wonderful and art poured in!  Some classes made them out of recycled materials, others made paintings or poems. One artist’s large fish sculpture had a sound system; it played excerpts of our Matter of Trust interview with Jean Michel Cousteau.

The children’s fish art was attached to the fishing nets that covered all of the San Francisco Earth Day 2011 event barriers.

Art was filmed and shown online and on exhibit. 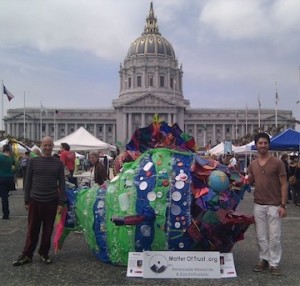 Artists Tim Crowe and Louis Chinn This fish was talking about plastic trash in the oceans! The audio of our interview with Jean Michel Cousteau was coming out of it’s mouth 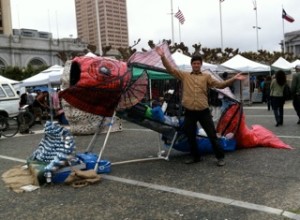 Grier Blumenschine Visitors dumped Earth Day Event plastic trash and bottles into this fish to show how it filled up in one day!