Why is BP turning away natural oil-cleanup materials being offered for free? 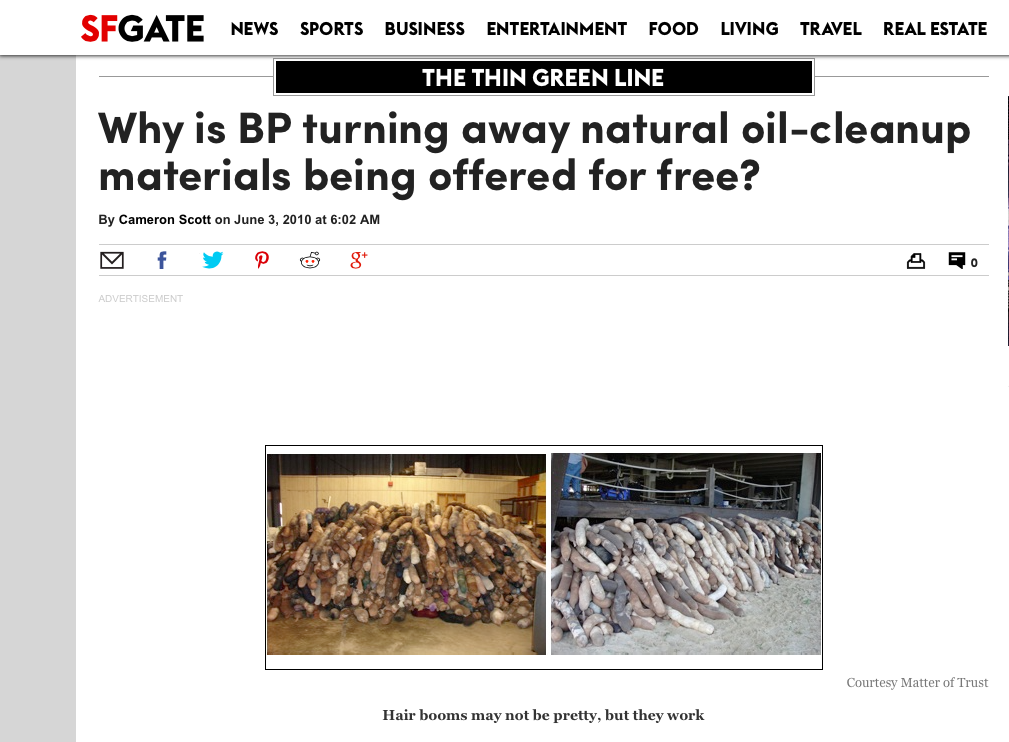 Hair booms may not be pretty, but they work

A month and a half later, we’re back to square one with the BP oil spill: BP doesn’t know how to make it stop.

I suppose that shouldn’t be a surprise when most of the contingency plan it filed was blank pages and bits of photocopied emergency plans for Arctic spills.

Did you know that “top kills” and “junk shots” are also recycled 30-year-old approaches (video) that haven’t been modified for or attempted in deep water?

Meanwhile,a number of approaches that sound at least as likely to succeed have been proposed but not attempted.

Some are still experimental — such as hyper-absorbant peat moss — but others have been used effectively in other major spills. For instance, supertankers were deployed to clean up a massive Saudi Arabian spill in the 1990s. Shell’s CEO has been trying to persuade BP to use the method, as well. The proposal has been aggressively stonewalled. Its major drawback? It would tie up a huge part of BP’s money-making process.

Another technique involves using a vacuum that separates oil from water, returning the water 99.9 percent pure. Actor Kevin Costner invested in this technology in the wake of the Exxon Valdez disaster. BP has purportedly approved six of the machines for use, for a total cleanup potential of more than a million barrels a day, but if the company is actually using them I haven’t heard about it. (If you have, share a link in the comments.)

If that’s all Kevin Costner can get from BP, imagine the uphill battle of the little San Francisco nonprofit, Matter of Trust. They’re the people who have lobbied for human and animal hair to be used as mats and in absorbent booms made of panty hose. Call them crazy, but it worked in the 2007 Cosco Busan spill here in the Bay Area, and they’ve got 19 warehouses full of mats and booms ready to be deployed for free, ED Lisa Craig Gautier told me yesterday.

Unlike synthetic booms which are made of — you guessed it — petroleum, these booms are made of a readily renewable resource, as my barber can attest. Initially, BP’s booms department, Critical Resources Material Management, contacted the nonprofit and indicated that it would approve use of the hair products, but it was elbowed aside by the PR department, which, as part of the Unified Command, issued a press release stating categorically that BP would not use hair booms. First it said said the booms don’t float. They do (video), especially when made from fur or fleece. Then BP claimed to have more than enough synthetic boom. It may or may not, but the hair booms are free. Then it said they feared the hair booms would leave behind debris. That’s rich! A little natural debris sounds pretty good right now!

When I asked how effective the hair products were, Gautier explained that hair naturally absorbs oil — which is why we shampoo. And, she explained, hair has “an enormous amount of surface area. That’s whey when birds are out there and oil gets into their feathers, they can’t clean it — it’s too much to clean.”

Gautier is confident the booms — assembled by volunteers with materials shipped by salon and grooming businesses at their own cost — will be used eventually, because the oil’s going to be around for quite a while (as tar on one’s feet at Santa Barbara and Padre Island attest). But sooner is better, and her group wants BP to agree to pay shipping costs and take charge of disposing of the used material.

Why is BP turning away natural oil-cleanup materials being offered for free?