What can we do from Wisconsin to help this oil spill? 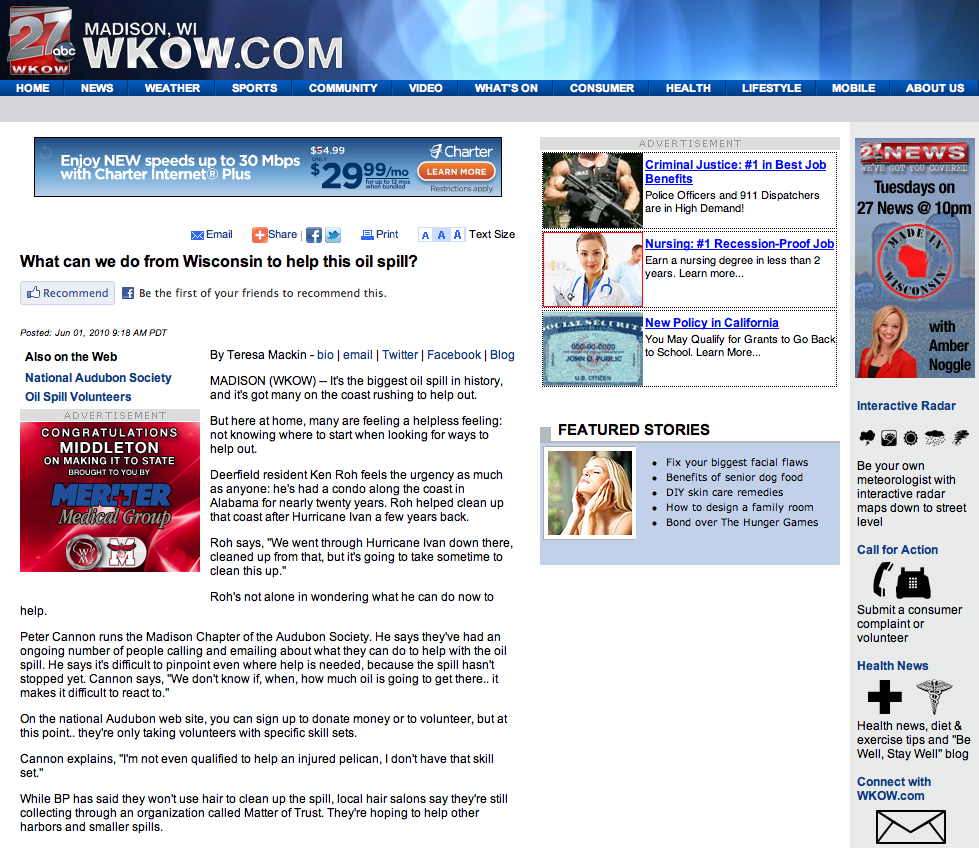 MADISON (WKOW) — It’s the biggest oil spill in history, and it’s got many on the coast rushing to help out.

But here at home, many are feeling a helpless feeling: not knowing where to start when looking for ways to help out.

Deerfield resident Ken Roh feels the urgency as much as anyone: he’s had a condo along the coast in Alabama for nearly twenty years. Roh helped clean up that coast after Hurricane Ivan a few years back.

Roh says, “We went through Hurricane Ivan down there, cleaned up from that, but it’s going to take sometime to clean this up.”

Roh’s not alone in wondering what he can do now to help.

Peter Cannon runs the Madison Chapter of the Audubon Society. He says they’ve had an ongoing number of people calling and emailing about what they can do to help with the oil spill. He says it’s difficult to pinpoint even where help is needed, because the spill hasn’t stopped yet. Cannon says, “We don’t know if, when, how much oil is going to get there.. it makes it difficult to react to.”

On the national Audubon web site, you can sign up to donate money or to volunteer, but at this point.. they’re only taking volunteers with specific skill sets.

Cannon explains, “I’m not even qualified to help an injured pelican, I don’t have that skill set.”

While BP has said they won’t use hair to clean up the spill, local hair salons say they’re still collecting through an organization called Matter of Trust. They’re hoping to help other harbors and smaller spills.

Jeanie Spahn, with RZ & Company in Madison, says, “At this point we have three bags full, and I believe we have to have it posted by the 10th.. but they keep updating us.”

Environmental groups recommend calling local legislators and the White House.. to work to change oil policy. They say perhaps an indirect approach is the best way to long-term change.

Jennifer Feyerherm, with the Sierra Club, says, “We need to reach out to decision makers and say this is not acceptable.. we need a new way of doing business. That’s meaningful, and it helps, even if it doesn’t feel like its directly connected to the spill.”

27 News also talked with the Volunteer Director in Mississippi. He says they’ll be calling on volunteers from other states if you do sign up on their web site.

Much of the direct clean-up on beaches deals with hazardous material though, and the average volunteer will be working from behind the scenes.