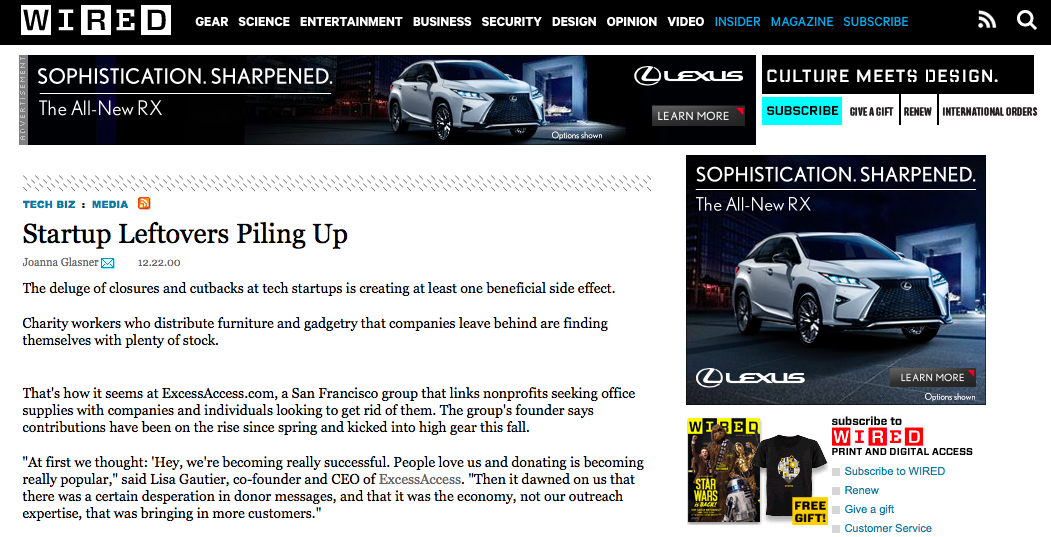 The deluge of closures and cutbacks at tech startups is creating at least one beneficial side effect.

Charity workers who distribute furniture and gadgetry that companies leave behind are finding themselves with plenty of stock.

That’s how it seems at ExcessAccess.com, a San Francisco group that links nonprofits seeking office supplies with companies and individuals looking to get rid of them. The group’s founder says contributions have been on the rise since spring and kicked into high gear this fall.

“At first we thought: ‘Hey, we’re becoming really successful. People love us and donating is becoming really popular,” said Lisa Gautier, co-founder and CEO of ExcessAccess. “Then it dawned on us that there was a certain desperation in donor messages, and that it was the economy, not our outreach expertise, that was bringing in more customers.”

In recent months, contributions have run the gamut from Pentium computers to conference tables to camera equipment. One California donor even offered a bag of medical marijuana, which ExcessAccess declined.

Gautier noted that much of the uptick in donations comes from the San Francisco Bay Area and New York — two regions with a high concentration of tech startups. Consistently, the supply of contributions has exceeded demand from nonprofits, which make their own arrangements to pick up free goods.

ExcessAccess isn’t the only charity that has seen an increase in corporate equipment donations. At the National Cristina Foundation, a philanthropic organization that distributes used computers to poor and handicapped people, donations have been on the rise for the past two years.

Cristina Foundation President Yvette Marrin says the boost in contributions isn’t closely related to the dot-com downturn, but has more to do with the number of companies upgrading their computer systems. Because the prices of PCs and related equipment have gone down, she said, more companies have been buying new machines.

Marrin said she expects the pace of donations to drop next year, however, as the economy slows and companies that recently upgraded opt to hang on to their still-functional computer equipment.

Whether a slowdown will extend to other categories of donations — like office furniture — is hard to predict. Recently, the demise of the Internet startup economy has done a lot to pad the interiors of many a struggling philanthropy.

“So much as we are concerned about those losing their jobs, it is wonderful to be able to match our charities with all this great ergonomic furniture they would never have seen,” Gautier said.