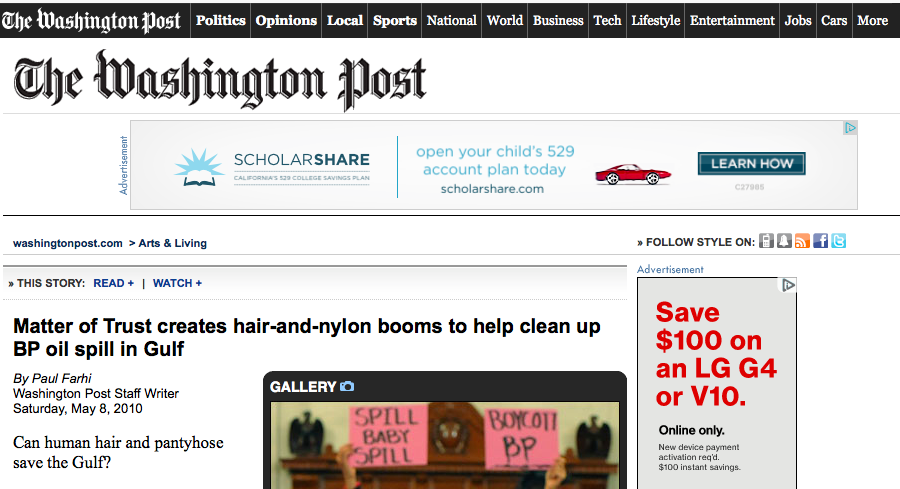 Can human hair and pantyhose save the Gulf?

Well, no, it can’t. The oil slickspreading from a damaged drilling rig off the coast of Louisiana is already too massive for any quick fix, no matter how well intended. But the environmental calamity has inspired a quirky grass-roots campaign that seeks to use donated hair and animal fur to create oil-absorbing booms.

The idea, promoted by a San Francisco-based nonprofit group called Matter of Trust, is to collect tons of hair and fur to stuff into nylon pouches, in this case used or defective pantyhose. When strung together in sausage-like skeins, the hair booms could be set in the water to collect the encroaching oil.

Hair, as anyone who hasn’t shampooed in a while knows, absorbs and holds oily materials well.

Matter of Trust is coordinating the collection of hair and fur through thousands of salons, pet groomers and ranchers. It has collected more than 450,000 pounds of the stuff from people around the world. The organization is storing the raw material in warehouses throughout the Gulf region. Meanwhile, volunteers in the area have hosted 19 “Boom-B-Qs” during which participants stuff hair into the nylon casings.

“We’re all growing this natural resource ,” says Lisa Gautier, who co-founded Matter of Trust with her husband, Patrice, 12 years ago. “It doesn’t get more renewable than this. We think it’s a safe, non-toxic way to do the clean-up.”

The movement has picked up corporate support, too. Hanes has donated 50,000 pairs of pantyhose, and Petco, the pet-supply and grooming chain, says it will donate as much as a ton of fur clippings per day.

It’s not clear how much of a dent in the problem the hair booms can make. Lisa Gautier says it takes about 15 pounds of hair to create a 12-foot boom. If all 450,000 pounds of hair were stuffed and deployed, that would create 360,000 feet of barrier, or about 68 miles’ worth.

The joint industry-government task force that is supervising the cleanup effort has more than 150 miles of industrial booms to block and absorb the oil in place around the Gulf.

What’s more, Matter of Trust isn’t authorized to place booms; only government agencies and volunteers certified by the official joint command are legally permitted to do so.

But there’s plenty of need: “We’re finding that everyone wants to boom everything,” says Mark Proegler, a spokesman for BP, the oil company that is legally responsible for the cleanup. “There’s just not sufficient boom to do that. Every parish thinks it’s the most important.”

BP has had no contact with Matter of Trust, but it appreciates the effort: “We certainly don’t want to discourage any of the people who’ve expressed a willingness to help,” Proegler says.

The feel-good aspects of the project aren’t lost on Washington salon owner Jacqui Davis, whose 15-store chain, PR at Partners, is participating in the effort. “It’s another way to be green and recycle,” Davis says. “We’re happy to help out. We’re telling our clients who want to take just a couple of inches off to cut it shorter and pick up some more oil. It’s great to be able to say you contributed in some way.”

If everything goes as planned in the great hair boom deployment, it does raise another question: Who cleans up all of that hair?

The booms, Lisa Gautier says, would be BP’s responsibility. The company would likely incinerate the booms after picking them up, she says.