Hair booms piling up around the Gulf, unused and ready 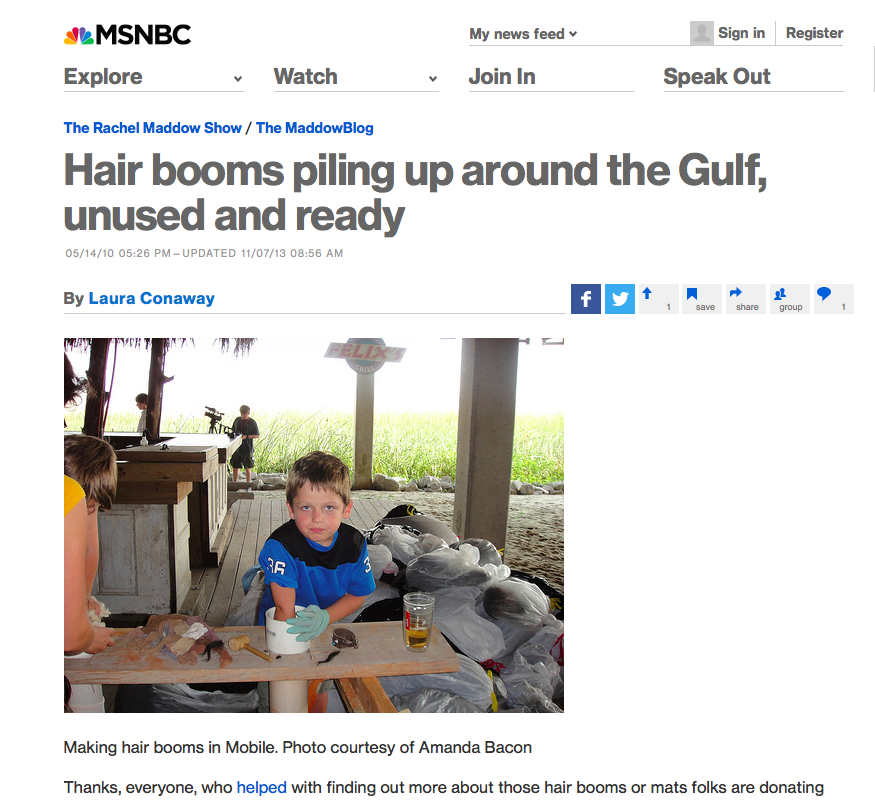 Thanks, everyone, who helped with finding out more about those hair booms or mats folks are donating clippings for to help protect the Gulf Coast. BP says its responders aren’t using the hair booms because they don’t work as well as commercially made booms and they tend to leave a mess. I’ll drop what I’ve learned after the jump. Because really, you might as well stick with this Facebook response to BP’s decision from Mimi Alidor:

Don’t you understand that people need to feel like they can take part in this? That they feel the need to do something? Little children cutting their hair and saving it. People far and wide. Don’t you know how to run a PR campaign that is for the good of the people? SO WHAT if it only soaks up some of the oil, but if one little child can save one baby bird, then they feel like they’ve made a difference. It is all they have.

BP may not be using the hair booms, but volunteers along the Gulf Coast are going to keep making them. Amanda Bacon of Mobile has been hosting Boom B Q’s, and she took delivery on 10,000 pounds of alpaca hair just this week. With some help from the charity Matter of Trust, Bacon’s got booms piling up at a local restaurant and in donated space in a warehouse. “Our hope is that we can deploy them, but we don’t have permission yet,” Bacon says. “We can’t get anybody to use them and we can’t tell people to deploy them.” If nothing else, Bacon says, she and other private homeowners with waterfront property can lay the hair booms out themselves if the oil slick threatens. “The attitude has gone from ‘We want to help’ to ‘We’re going to help.’ ” Despite assurances from the Deepwater Horizon Response team, it’s not clearwhether there’s enough of commercially available boom favored by official responders to go around. Matter of Trust, which launched this project, says it has grown more in the last few weeks than in all of its previous 12 years. Lisa Gautier says she’d like to see the creation of an “international fiber recycling system” that could create green jobs around marine harbors and goose America’s textile industry again. For now, the booms keep piling up, filled with donated hair from salons and pet groomers around the world and stashed wherever volunteers can put them. Gautier says the hair booms work great, and If the oil spill approaches unprotected areas, demand for them will grow. “We have confidence that Southern states are going to say, ‘Why aren’t you using this boom?’ ”