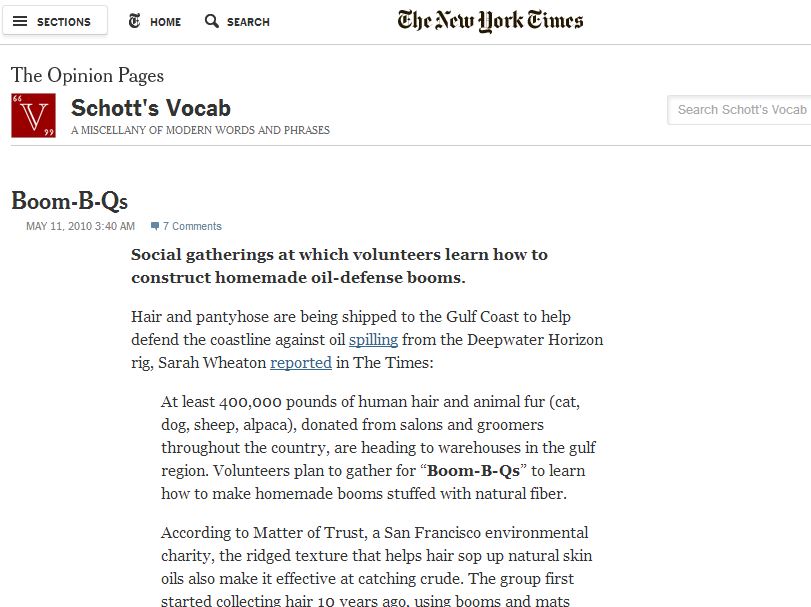 Social gatherings at which volunteers learn how to construct homemade oil-defense booms.

Hair and pantyhose are being shipped to the Gulf Coast to help defend the coastline against oil spilling from the Deepwater Horizon rig, Sarah Wheaton reported in The Times:

At least 400,000 pounds of human hair and animal fur (cat, dog, sheep, alpaca), donated from salons and groomers throughout the country, are heading to warehouses in the gulf region. Volunteers plan to gather for “Boom-B-Qs” to learn how to make homemade booms stuffed with natural fiber.

According to Matter of Trust, a San Francisco environmental charity, the ridged texture that helps hair sop up natural skin oils also make it effective at catching crude. The group first started collecting hair 10 years ago, using booms and mats made of hair to help deal with a series of small spills before a major push to clean up the Cosco Busan tanker spill in 2007. …

Amanda Richardson-Bacon, whose Clear Point, Ala., home is on Mobile Bay, came up with the idea to hold boom-construction parties with another volunteer from Mississippi. She planned to soon train about 125 people, each of whom would then host Boom-B-Qs.

(The BBC reported that 370,000 salons were participating in a “massive hair lift,” organized by Matter of Trust.)