Why Chicago Is Becoming The Country’s Urban Farming Capitol 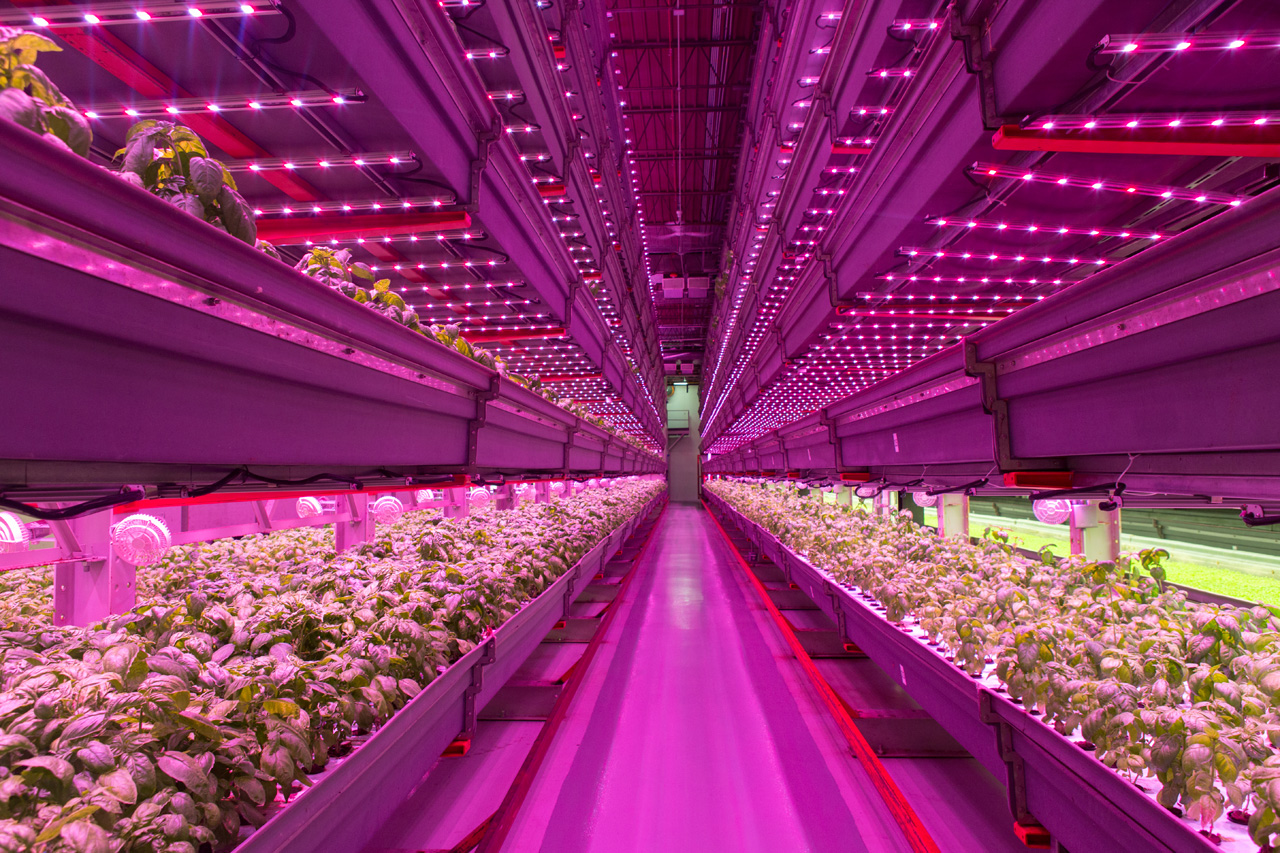 When you walk into Farmed Here’s 90,000-square-foot warehouse in Bedford Park, a sleepy industrial outpost about 15 miles southwest of Chicago, you might not immediately register that you’re standing in the second coming of the locavore movement. But then you get inside and smell basil—along with baby greens, broccoli, and kale—all of it bathed in the purple fluorescence of LED light and stacked seven racks high in a massive hydroponic system that pumps soybean- and kelp-infused water through a temperature- and humidity-controlled system, nearly 24 hours a day, 365 days a year.

Upstairs, the corporate office resembles that of a low-budget Silicon Valley startup: an unfurnished cube with Post-it notes stuck to the wall, a dry-erase board etched with circuit board-like schematics, and an executive team crowded around a table with their laptops out. It’s there I met CEO Nate Laurell to find out why Chicago is becoming the nation’s urban farming epicenter, with the Chicago Urban Agriculture Mapping Project reporting more than 821 growing sites across the city, ranging from community and school gardens to rooftop farms, orchards, and multi-acre urban farms.

Laurell, the soft-spoken investor who put up $13 million to help launch the vertical farm in 2011 and leads the investment as a partner in the $50 million clean and biotech investment fund GreatPoint Ventures, is one of the most convincing cheerleaders for Chicago’s urban farming renaissance, particularly for vertical farming—the nascent industry of growing food in environmentally controlled, indoor facilities, where pests, diseases, light, temperature, and humidity can be highly controlled.

According to one study, vertical farming is expected to be a nearly $4 billion market globally by 2020. Laurell is sure it will happen. “The greens market for Chicagoland alone is $400 million dollars,” he says. “Given the market is so big, and it’s so top of mind for people where their food came from and how it was grown, even if only some fraction of that food grew in an indoor environment, when you extrapolate to other cities in the U.S. and abroad, you’d easily reach $4 billion; $4 billion seems light.

He adds that 75% of U.S. consumers live within 200 miles of a city, where vertical farming’s apparent advantages over outdoor agriculture—year-round growth, a small geographic footprint, a high yield per cubic foot ratio, and an often shorter distance to market—make it particularly appealing. This is one of the reasons, in addition to the availability of unused manufacturing infrastructure throughout the Rust Belt, that Farmed Here plans to expand to up to 15 cities within the next decade, he says.

Competing in the Chicago vertical farm market is Urban Till, which hasbrought in $3.13 million in investments since 2013. The vertical farm was launched by Brock Leach, who worked for Martin-Brower, a logistics company that handles food distribution for McDonalds. Laurell is quick to point out that the two farms, though they use similar hydroponics growing technology, operate in different markets; Urban Till distributes mainly to local fresh food restaurants and Farmed Here sells to supermarkets.

Then there’s the alternative: The greenhouse model of Gotham Greens, the privately held Brooklyn-based rival, which, in November, 2015, opened a 75,000-square-foot rooftop farm in Chicago’s Pullman Park neighborhood and currently employs 45 people, from hourly seeders and harvesters to sales associates and plant scientists. The key difference between a greenhouse and vertical farm? Natural light. A vertical farm is lit by artificial light; picture Costco, but with microgreens instead of groceries stacked to the ceiling. Gotham Green’s greenhouses, on the other hand, are just what you’d picture when you think of a greenhouse, absorbing the sunlight through a translucent roof.

Gotham’s Chicago’s outpost—which sits on top of natural soap company Method’s newly retrofit manufacturing plant—is its largest to date and adds to the company’s three existing greenhouses in New York. “Chicago was a logical expansion because it is a large city—by market the third largest—a cold weather place with a short growing season and a limited supply of year-round local produce,” says Viraj Puri, CEO and cofounder of Gotham Greens.

Why are investors suddenly so interested in indoor farming? “Two reasons,” Laurell says. “One, there is a technological change that enabled this to happen through low-cost LED lighting. Solar has gotten cheaper and cheaper, and the cost to operate lights is more economical. On the consumer side, there is a large demand for local food, food grown close to the city. People want to know where their food comes from and cut out transportation miles to get more freshness.”

Efficiency of production is also key to a model that Puri says has helped Gotham Greens capture some $30 million in investments and place their products at Target, Whole Foods, Treasure Island, and hundreds of other grocery stores and food retailers. “The traditional farmer in Illinois turns a head of lettuce twice a year, every 60 days—maybe a third turn if they’re lucky. We do 25 crop turns per year, and a lot of that has to do with controlling climate, temperature, humidity, light, and carbon dioxide,” Puri says.

Why is the industry taking hold in Chicago? “If I had to speculate, I’d say that electricity is cheap here, the economics are better than the coasts,” Laurell says. This seems a reasonable hypothesis: The Bureau of Labor Statistics reports electricity prices averaged 18.2 cents per kilowatt hour in the New York metro area. Chicago area households: 15.4 cents per kilowatt hour.