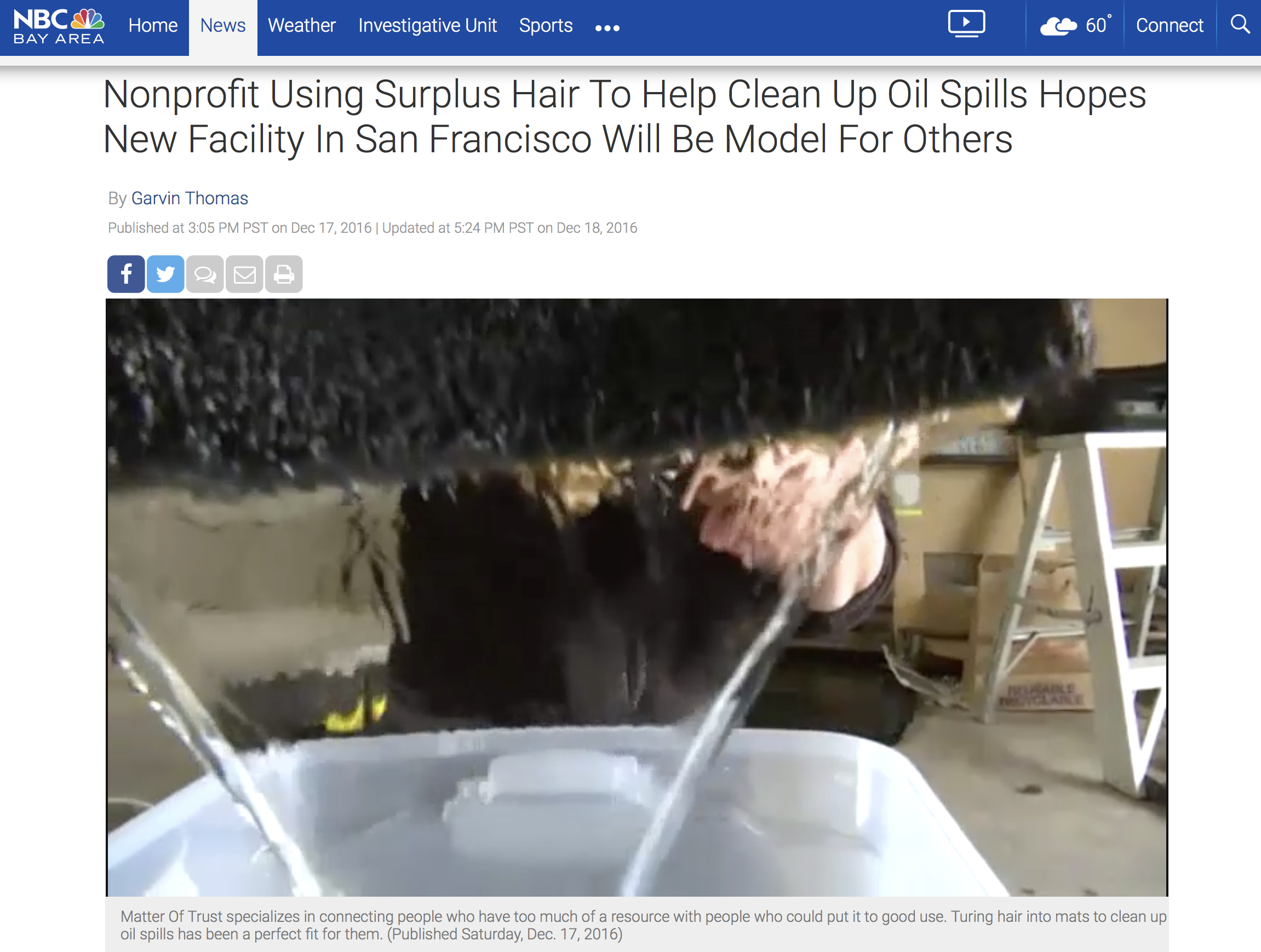 Spend enough time in San Francisco and you begin to think there’s nothing that could happen on the streets of this famously unconventional city that could surprise you.

Then a tractor-trailer pulls up on Howard Street and begins to unload box after box of, well, we will allow the woman who was waiting for the delivery to fill you in.

“It’s hair,” said Lisa Gautier, founder and president of the non-profit Matter of Trust. “And fur. And fleece.”

At this brand new facility, the hair will be felted into mats that are exceptionally good at soaking up oil, particularly when it has spilled into waterways. Gautier says it is a concept that, although new to most people, is one they quickly grasp.

“Every age gets it,” Gautier said. “The fact your hair collects oil is a basic one everyone understands.”

Matter Of Trust got into the hair mat game close to ten years ago, but the non-profit has been around twice as long as that.

They have long specialized in connecting people who have too much of one resource, with those who could make good use of it so it doesn’t go to waste.

The ever-growing resource of hair was a perfect fit for the organization. The boxes of hair delivered on this day have been collected from salons, barber shops and pet groomers from all over the country.

The whole idea of hair mats began with a hairdresser in Alabama named Phil McCrory. He, however, was never able to bring the idea of using them for oil cleanup into the mainstream. This is where Gautier, and Matter Of Trust, came in.

“It was the first time I think I realized that not all good ideas are heard,” Gautier said.

Matter of Trust began collecting the hair from salons across the country and assembling the mats in factories, most recently in New Mexico.

They have been able to deploy the mats to some of the worst oil spills in the country including the Cosco Busan spill in San Francisco Bay in 2007 and the BP Deepwater Horizon disaster in the Gulf of Mexico in 2010.

With this new facility in San Francisco, however, Gautier is thinking small rather than big. She believes that turning hair into mats could be a great cottage industry with small, light-industrial facilities like this one will soon be in cities all over the country.

“We think this could be a model,” Gautier said.

She envisions a modern day “paper route” where young people pick up hair from salons and groomers all over the city and bring it to a place to be felted. The city would then have a ready supply of mats to respond to spills of all kinds on short notice. The localities would not only benefit from cleaner water but from the good-paying, light-industrial jobs that would be provided.