Carbon dating has found living baobab trees that are over 6,000 years old, which is older than the Great Pyramid and Sphinx. Want some more  perspective? When some of the baobabs in Senegal were just reaching maturity, our ancestors were still using stone tools. And a number of the baobabs that European explorers came upon in the 1400s were already millennia old.

And they are big. The enormous size of some of the baobab trees has led to them being used as kind of makeshift buildings. The hollow trunks of large baobab trees have been used as houses, prisons, and even a pub.

Baobab trees are very eerie looking and in addition to being Senegal’s national symbol, they’re used for nearly everything under the sun.

Boababs are fat-trunked trees that are native only to Madagascar and North-Western Australia. They have been known to attain girths of almost 30m, with a diameter of about 9-10m. It is thought that boababs live up to 2,000 – 6,000 years.

The bark of the African baobab tree can be used to treat fever and combined with another plant was used toprotect against malaria. Leaves and roots are used for medicinal purposes, primarily gastric and chest complaints.
The Baobab is also to be considered an aid to fertility. Infertile women place their hands on the tree and promise to either offer sacrifice, or the naming of their child after the tree in return for fertility. Breaking the promise results in the death of the child. Different parts of the tree can also be taken to enhance fertility or induce an abortion.You can also eat it! The seed kernels are eaten raw or roasted, and are a highly nutritious food source and the bark can be ground into a powder for flavoring food. The leaves of the baobab were traditionally used for leaven but are also used as a vegetable. Its fruits and seeds are also edible for humans and animals. The pulp of the fruit, when dried and mixed with water, makes a beverage that tastes similar to lemonade. The seeds, which taste like cream of tartar and are a valuable surce of vitamin C and calcium and were used to protect against illness, were traditionally pounded into meal when other food was scarce. 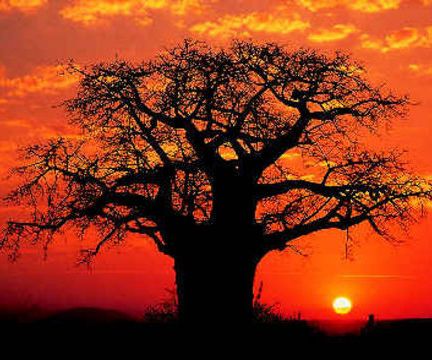 The Boab’s bark contains a fiber that is used to make string, rope, fishnets, twine, cords, sacks and clothing and the gum of the tree can be used as glue. Other products such as soap, necklaces, rubber, musical instrument strings, waterproof hats and cloth can be produced from the various parts of the baobab tree. The bark of the baobab tree has to be removed to obtain the fiber but the baobab tree can regenerate the loss of bark if it is cut away.

Carbon dating has been used to estimate the Big Baobab’s age at ± 6000 years. To put this in perspective the tree is possibly older than the Giza Pyramids and was certainly here thousands of years before the birth of Jesus Christ. When the first leaves sprouted the Sahara Desert was still lush and green and our Iron Age ancestors were roaming the land.

Griot are keepers of the oral tradition. They are singers who chant praises to Senegalese families in times of celebration. The trade is one passed on from father to father, from generation to generation since as long as people can remember.

A family generally has its very own griot, which they support financial, in exchange for a recounting of their great grandparents, grandparents and parents’ family stories. The stories of course, are generally always positive, or if exposing a certain ancestor’s failings, quite humorous and harmless. Though the trade is considered lowly, their role is essential because they are Senegal living historians. They are found in every ethnic group in Senegal except for the Diolas.

Griots have never worked the soil and, as a result, cannot be buried in the ground. It is said that if a griot should be ever buried in the land, a terrible drought will develop.

They are buried within Baobab trees. Baobab trees are considered useless trees, owing to the fact that their bark cannot be used to make furniture. The fruit it bears, the Pin de Singe, is used to make Bouie, a concoction that when mixed with hot water, is good for diarrhea. A baobab tree can also harbor honey in its highest branches. The tree is very common in Senegal and part of the reason is that it is not cut down for resources.

Feeling that they deserved a proper burial, griots have fought to be buried alongside their brothers in the soil. President Senghor passed a law allowing this, thereby outlawing any burials within Baobab trees. The same year the law was passed, there was a severe drought.

According to African legend, the Baobab wanted to become the most beautiful tree of all. When it realized that this was not possible, it put his head into the ground, so only the roots pointed heavenward. Today the tree with the root-like branch structure has become characteristic of the African grasslands.

Another legend holds that when the Baobab was planted by God, it kept walking, so God pulled it up and replanted it upside down to stop it moving.

The Creator is said to have initially planted the baobab in the rainforests of the Congo Basin, but the tree complained that the dampness made its trunk swell. So the Creator moved it to the high slopes of the Ruwenzori range, East Africa’s Mountains of the Moon. But the baobab continued to grumble about the humidity. Angered by the incessant wailing, the Creator took the swollen trunk and tossed it into a dry part of Africa. The tree landed upside down with its roots in the air. Unfortunately they were valued more as a material, than as a symbolic and cultural icon worth preserving.

There’s still some left, but no longer any giants like that.